The world, still our market

Reverse Osmosis: the power to dominate the ocean 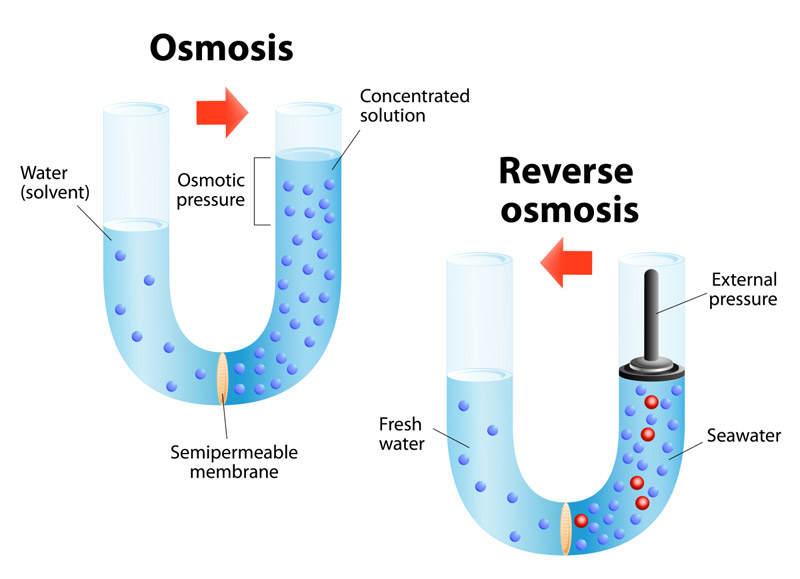 The ability to transform salted oceans in drinkable water is perhaps the greatest achievement in terms of human livelihood. Desalination processes, as well as many other expertise progressively improved by mankind over thousands of years, have known their major breakthroughs during the last century. Not so long ago, in 1828, a medical and physician French researcher named Henri Dutrochet turned science and investigation upside down when discovering the osmotic phenomenon such as we know it today. Even the theories about the actual functioning of life itself suffered sweeping changes: thanks to semipermeable membranes and natural variances of concentration between two solutions, Dutrochet proved that fundamental laws of physics and chemistry (and therefore mathematics) were able to clarify life’s most basic processes. However, almost 50 years were necessary to develop the first successful artificial membranes, which opened the door to further and ambitious fields of research.

The beginning of the 20th century threw some light on the subject, and scientists settled the basic concept of “chemical energy of a solution”. Physiochemical science as an independent discipline was born, laying the foundations for future thermodynamics chemical theories that could offer explanations to the osmotic phenomenon and, first and foremost, help understand osmotic pressure as the difference between chemical energy of two solutions.

After World War II, global issues changed in a definitive way. Pollution, overcrowding and water contamination emerged as future’s major natural challenges. Fossil fuels low prices set the tone in development of first desalination plants, based on evaporation of sea water. These techniques, although very versatile and robust, were actual energy guzzlers, squandering up to 20 kWh / m3 in most cases. Furthermore, it was impossible to ignore that this kind of water treatment facilities used huge amounts of coal and fuel to produce steam, so the environmental issue became a compelling and legitimate reason to definitely discard the evaporation option.

The proposition of reverse osmosis by Charles E. Reid in 1953, dismissed at first instance, was the future key to dominate the seas. However, seawater reverse osmosis desalination procedures were called to depend on extremely complex membrane systems that gradually purify salt water piped straight from the ocean. Step by step, technology finally permitted to build membranes capable to handle saline solutions, and the world’s first commercial reverse osmosis plant came into existence in 1963 in Coalinga (California, USA), with a new pilot program that lured the attention of water engineers and governments around the world.

The innovations and discoveries occurred along the last decades have made membrane technology efficient and affordable, converting clean water in an accessible good for many heavy industries. Today, reverse osmosis and membrane filtration components are utilized for thousand of different applications, and whole cities and countries survive thanks to desalted water.

Nowadays, new membrane technologies have completely displaced the old desalination systems based on water evaporation (both Multi-Stage Flash and Multiple-Effect Distillation). In addition, some new processes allow for recycling worn out membranes. The arguments that glimpse reverse osmosis desalination as the technology humanity will use for decades are strongly convincing. Refinement in all stages of the procedures makes this technique greener, economical and comfortable day by day. Now, Saudi Arabia is projecting the construction of the first solar powered desalination plant… Future is already here.